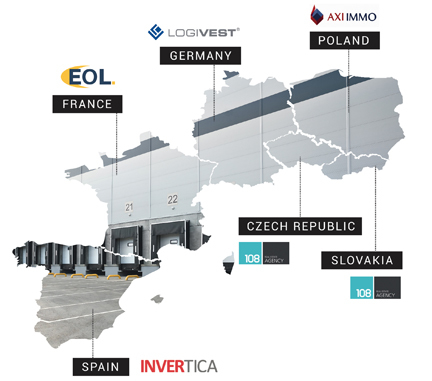 In 2017, to support future growth, EOL launched an international real estate logistics offer responding to the requirements of its clients who conduct logistics projects beyond our national frontiers. The IRELS network (International Real Estate Logistics Solutions) was established in consequence, further to an initial partnership with the Spanish operator Invertica.

Four new partners, all major players in their respective countries, have recently joined the IRELS network: LOGIVEST in Germany, the 108 AGENCY in the Czech Republic and Slovakia (108 Agency Czech Republic and 108 Agency Slovakia), and the company AXI IMMO in Poland. IRELS now has 18 offices and 200 experts for the support of its clients in all their Real Estate logistics projects (whether for the identification of existing buildings or built to suit project, land search for development, Capital market, etc.).
Discussions in progress with a number of countries have reached a highly advanced stage, and are expected, in the short term, to develop the network with new professionals from Logistics real estate sector who share the same philosophy as existing members, and who observe the same values. Early successes, together with initial feedback from clients, have been highly encouraging.

Laurent Sabatucci has clarified his ambitions as follows: “The aim of IRELS is to become the leading international network of specialists in property logistics”.

The IRELS Group is also announcing the launch of its website at www.irels.net